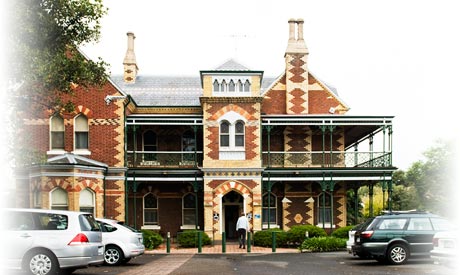 1986. Halley’s Comet was appearing in the sky, the UK and France announced its plans to construct the Channel Tunnel, and Servants in Hawthorn (now known as Servants Community Housing) began managing Carrical House in Mason Street, Hawthorn.

At the time, Carrical was run as private housing, and the majority of its residents were employed,single men on a low income. The property was in danger of closing when a small group of people from Hawthorn West Baptist Church perceived a need in the community to provide housing for those who otherwise would have been forced to live on the streets. They formed the not-for-profit Servants in Hawthorn, and began leasing the property from the Office of Housing, running it as a boarding house.

However,over the years, Servants’ unique model of housing has developed alongside a health system now better equipped to serve those living with a mental illness. This has allowed increased numbers of residents with mental health issues to successfully integrate into the Servants Community.

Carrical has now been managed by Servants for over 30 years and is currently home to 38 residents. A strong culture of community exists in and around this house. Weekend BBQs are hosted by various community groups. Training for the DeCastella run is offered and encouraged. Haircuts are provided by Nas, the Streets Barber. There is always something happening here!

Fast forward to 2011 and the dream of providing a home to more residents in Boroondara looked to become a reality. Hamer Court was previously a nursing home, then had accommodated those rendered homeless due to the Black Saturday bushfires, and had been sitting empty for roughly six months when Servants approached the Boroondara Council.

The number of people waiting to be housed by Servants was long, and rooms were quickly filled. Rooms with en-suites, multiple communal kitchens, living areas and outdoor spaces as well as a beautiful, leafy central courtyard provided residents with space to get back on their feet, live alongside people with their own unique stories and be given the support they needed. Although unique in a variety of ways, the formula at Hamer remained the same: careful resident selection, live-in management, rules that need to be adhered to and the provision of two meals each day.

Recently Hamer was the recipient of an IKEA grant, which saw the residents’ living and dining area fully redecorated. Today Hamer houses 28 residents.

Three years later, in 2014, Servants followed up an article they had spotted in the local paper. A nursing home for the Slovenian community, ‘Mother Romana House’, was available to be leased from the Catholic Slovenian Mission.

Builders, plumbers and electricians alongside other trades ensured that Romana was soon home to another 24 marginalised people. Rotary members generously spent countless hours pulling tiles off bathroom walls and cleaning them. What an effort!

Twenty four people currently live at Romana. It is typical to see a group of people having a cup of tea and a chat out the front, while others are playing pool in the living room. Over the years they have enjoyed visits and haircuts from Nas, the Streets Barber, and his team.They have had cooking workshops run by OzHarvest. Financial workshops have given residents skills to navigate and have greater control over their finances.

Changing of the guard

In January 2017, Matt Maudlin retired as CEO. Matt joined Servants in 1998 and over 18 years oversaw the growth and development of Servants from a single household at Carrical to an organisation which operated three properties that 89 residents and a group of committed managers call “home”. He built strong connections with the local community, nurtured staff and volunteers, and championed the cause of residents for whom Servants exists.

Amanda Donohoe succeeded Matt as CEO that month. She was already well known to many within Servants’ networks. Since 2010 she served as Servants’ Operations Manager and acted as CEO on a number of occasions. She provides Servants with the leadership it needs to continue to serve and support its residents, bring strategic initiatives to fruition, and live out the organisation’s values.

On the 27thof August, 2018 Servants broke into new territory and opened its first women only house in Hawthorn. There was an obvious disconnect between the number of women needing housing in the Eastern Region and those actually housed. The message from local support workers and case workers was clear: women needed housing, but did not want to be housed with men. Thus Servants began the task of finding, funding and populating a women only house.

Many groups rallied around the cause to make it happen. A local Rotary organisation, Boroondara Cares Foundation and other financial donors were instrumental, not to mention Kooyong’s Federal MP, Treasurer Josh Frydenberg, securing a $300,000 federal grant to go towards this particular project. Hawthorn West Baptist Church’s manse was the property of choice, ideally located but in need of renovation. Rotary groups offered $20,000 a year to help with operating costs and also got their hands dirty to create a garden. Locals donated whitegoods and an interior designer helped source cheaper furnishings. The four-month renovation certainly was a team effort!

Six women are now able to be housed in a safe, secure and beautiful place. A live-in worker brings the logistical and emotional support required for the residents to find their feet and take steps towards moving into independent living. The 10-year lease allows Servants to offer long-term care for some of the most vulnerable people living in the community.

There are many projects in the pipeline. Servants is working hard to continue housing its 95 residents well, whilst also looking to address the growing need for safe, affordable housing in the inner east of Melbourne. Currently, plans are being drawn up for a tiny house/ bungalow to house the live-in manager at the Women’s house.

New challenges continue to crop up. Rising utility bills place pressure on our finances as we try to keep the rent low for our residents and not pass on increases when their income is not rising. The lack of available and affordable land in Boroondara and surrounds has always been a challenge and we are thankful to our four different landlords that make their properties available to us at below market rate. The challenge is to find more because the need is ever increasing.

However, the passion of the Servants team is alive and kicking. Each resident that is housed is another person afforded another chance to reset and get back on their feet. Whether Servants houses someone for a few months or 30 years, the opportunity to provide affordable, safe housing to each person is a privilege. Giving every person respect, hope and dignity is what Servants believes will make a difference to our society.